Twin Dragon Bracelet of The Earth 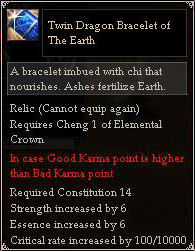 The League of Beggars is a White clan originally founded by Yi Metalstaf. and is now ruled by Drunken Moon. It is often reffered to as 'The Endless Clan'.

The clans kung fu centers around their barefist Drunken Monkey styles. as well as a variety of styles originating from things like dog-beating, street-performing, and other unconvential sources

The Beggars' headquarters are situated in Tianjin City, in Hubei Province

To join The League Of Beggars you first have to reach Cheng 4 of Losing Self. Once done, pick up a quest from Dan Shizong, who will tell you to talk to Fang You. After this, you must speak to the Elder of the Beggars, Bamboo master. He'll ask you to repeat the phrase 'Rice Is Everything'.

then you will be accepted into The Beggars Clan, and will be given a Beggar Jacket, a Gourd Dipper, and the epithet 'Beggar Apprentice'.

The classes in the Beggars clan are as follows: